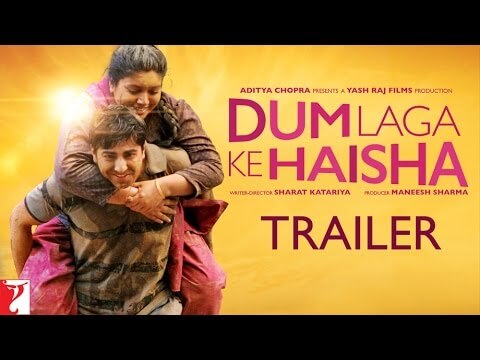 The film is like a whiff of fresh air from the very banks of Ganga-where the location also becomes a character, and what a fine character at that. Full marks to director, Sharat Kataria, for giving us a beautiful and honest Haridwar, endearingly unspoilt. The houses, the river banks, the streets, the bazaars, the bridges, the scooter and rickshaw rides, the public library, the ill-fitting double-breasted coats- simply and sincerely provide the genuine flavour of the small town, with middle class populace. The second flavour that works beautifully in the narration is the era of the 90s-when cassettes and video cassettes were yet to be dethroned by CDs, when Kumar Sanu’s nasal voice had filled the void left by Kishore Kumar and when landlines and PCOs were not archaic. The script is a winner and the entire ensemble cast seems to be in the skin of their respective characters. Ayushmann Khurrana, finally justifies the extra ‘n’s and ‘r’s in his name and plays his character with amazing ease and understanding. His body language, diction and dressing create a most believable Prem Prakash Tiwari alias Lappu.

This is also a landmark film in terms of introducing an over-sized leading lady and debutant Bhumi Pednekar is as real as can be and just lives her Sandhya to perfection. (Not surprisingly, she was discovered by the same casting director, who discovered Ranvir Singh and Arjun Kapoor).Sanjay Mishra again proves what a fine and delectable actor he is. Seema Pahwa (as Sandhya’s mom),Sheeba Chaddha(as the ever-taunting bhua) and the actors playing ‘shahka head’ and the two actors playing Prem’s friends are all triumphs of fine characterisation and flawless portrayals. There are lots of endearing moments in the everyday life of the lower middle class household that make you smile or chuckle or laugh out loud and at times even making your eyes wet.

Anu Malik gives a good score, which mixes with the mind and mood of the film.
Surprisingly, the climax, which could have taken the film to further heights, just fills the bill and doesn’t lift the proceedings. Till the time, there is no ‘dum laga ke’, the going-on is super smooth. The end- result is expected and somewhat flat and doesn’t actually make the audience greatly emotional.

All in all, YashRaj Films deserves much praise for producing this brave and different tale. The family audience, in smaller towns (for familiarity factor) and bigger cities (for nostalgic factor) should love the film and the word of mouth publicity should work very well for the film. If the movie does well at box-office ,it will be well-deserved and if ,by any quirk of fate-it doesn’t, it will be a favourite on the TV networks ,in no time. This feel good movie is recommended ,from heart.