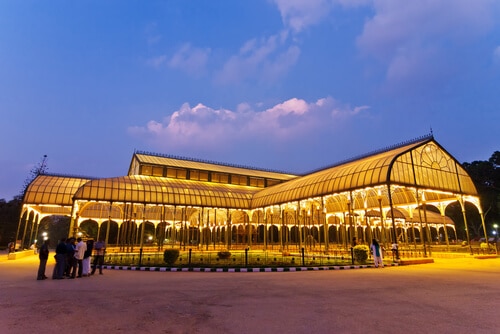 Bangalore carries the vestiges of a rich past and a drive down the city lanes would provide more than just a glimpse of it. Greco-Roman architecture blend marvelously with Muslim heritage, carefully laid-out colonial gardens vie for attention with twenty-first century urban kitsch. To a traveler passing through, this city would come across as a place that harmoniously blends the old with the new. Here’s a low-down of some of the must-see places to get a feel of Namma Bengaluru.

The first place to feature in your itinerary would be Bangalore Palace, a magnificent reminder of the city’s royal past. Built in 1880 by Chamaraja Wodeyar, and modeled on London’s Windsor Palace, this abode of the kings delights one and all with its elegantly-carved woodwork, paintings, and fortified towers, complete with Gothic windows, battlements and turrets. An exquisite door panel at the entrance leads to grand settings inside. For a while this palace fell into disrepair, but was soon restored to its former glory. Today, it has become a venue for various exhibitions, concerts and cultural programmes. After a royal flavour let’s stoke our religious fervour with a visit to the Bull Temple, which is much more than a devotee’s hangout. Like any other temple, this too has a rich mythological past and legend has it that this old temple, dedicated to Nandi, was built to appease a vagrant bull that persisted in devouring the groundnuts grown in the surrounding fields. Built by Kempe Gowda in the sixteenth century, the Bull Temple also houses the huge statue of Nandi, carved out of a single granite rock. During November and December, a groundnut festival is held here. It is also believed that the river Vrushabhavathi originates from the feet of the statue. As you drive through the center of the city, a whiff of fresh air and swathes of greenery pleasantly surprise you. This is the Lalbagh Botanical Park , the lungs of the city and home to various species of plants including exotic orchids and cacti. Dotted with fountains and criss-crossed with cemented paths, Lalbagh is the popular haunt of joggers and bird watchers who come here for a brief respite from their hectic city life. The glass house inside the garden hosts regular flower shows and throngs with visitors on special occasions like the Independence Day and the Republic Day. Close to Lalbagh is Vidhana Soudha , a marvel of neo-Dravidian architecture and the city’s most important landmark that houses the legislative chambers of the state government. Built in the 1950s, it has four floors above and one floor below the ground level and sprawls across an area of 245,000 sq ft. The central dome, 60 ft in diameter, is crowned by a likeness of the Indian national emblem. Visit on a Sunday evening or on a public holiday, and feast your eyes on the beautifully-lit-up building. And last but not the least, there is the Attara Kacheri, an impressive two-storeyed red building of stone and bricks built in Greco-Roman style. Once the hub of revenue and secretariat services, it now houses the High Court of Karnataka. Bangalore’s first instance of heritage activism came into fore in 1982 when a public interest litigation saved the flaming red Attara Kacheri from demolition.

Now this short list should get you into the groove of exploring the city in full throttle!