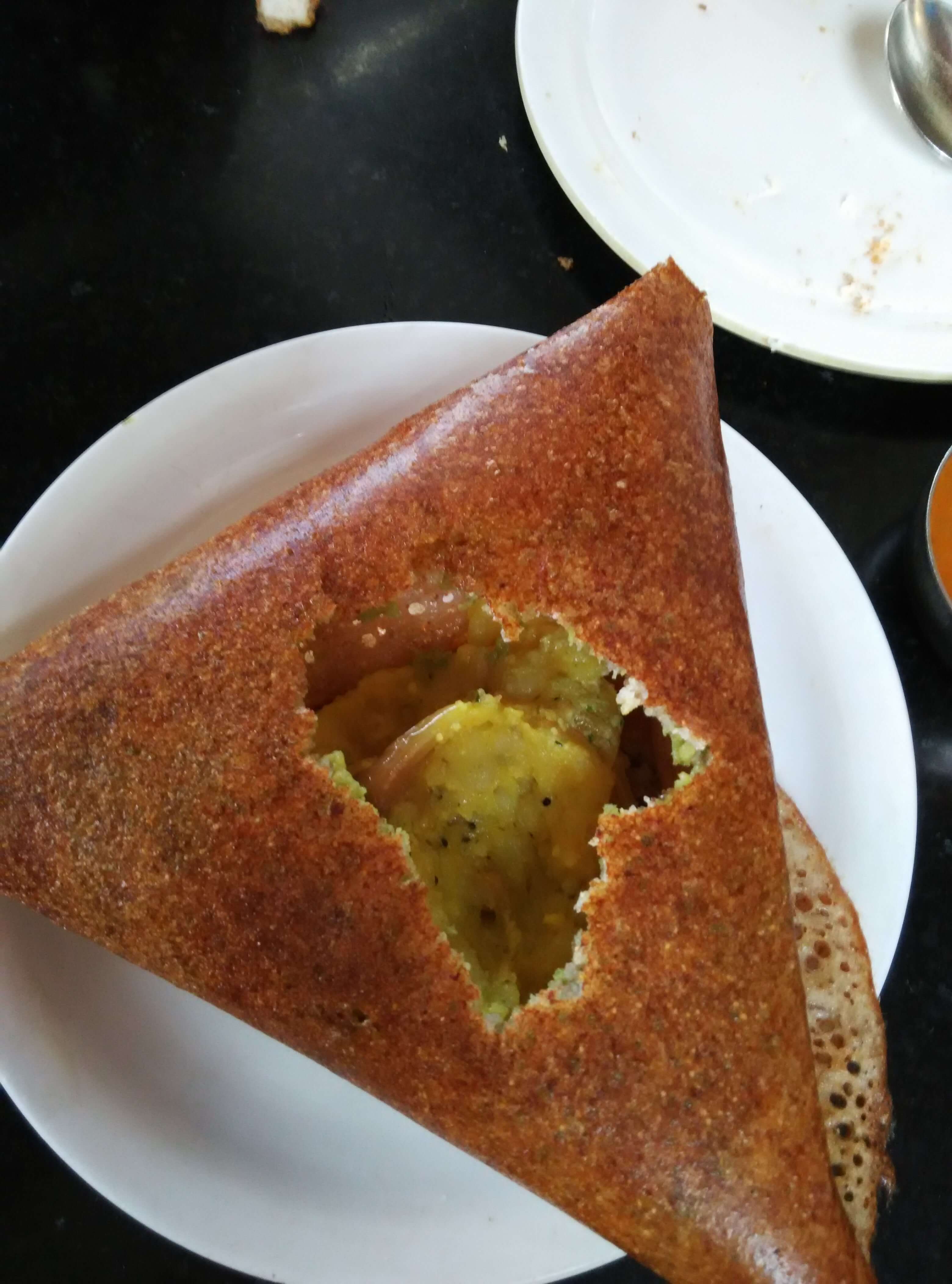 What does one do when presented with a huge dosa that’s close to a foot and a half across, rolled into a wide cylinder that could hold a wall calendar or two? Some daunting varieties are bigger than the average person’s face. Many people, on instinct, rip off a bit of the crust along with a some of the potato masala, dip it in the accompanying bowls of spicy sambar and coconut chutney, and gulp it down. But hold on to that thought now; you can’t viciously attack a dosa like that. So how does one best savor this seemingly innocuous and traditional South Indian dish? It could be argued that there really is no right or wrong way to eat the Masala Dosa. As long as the succulent soft filling, the buttery flavor of the batter, the tangy fermented notes of chutney and sambar are going into your gullet, it’s a pretty good situation, right? The folks at “It’s Okay to be Smart” beg to differ as there are set ways to eating the Masala Dosa. Some start right from the top, others the bottom, few work their way in from the sides, still others just open the fold and begin like a simpleton, while the adventurous few drill into it from the middle

There is an additional bit of suspense built into the  architecture of the masala dosa. This may not be immediately evident as you just gape at it wondering how to eat it, pondering its size, its form, and its possible aerodynamic characteristics. This ‘concealed’ feature is the coating of red or green chutney – on top of which sits the potato masala. If you plan on starting from the very top of the Masala Dosa, then you come under the well organized category of people. Those who’ve cracked the big mysteries of life and they have the patience to wait and enjoy every bite by tearing a piece of dosa with their fingers, rolling it partly over with the masala potato stuffing, dipping it into the coconut chutney and sambar, and letting it fall into the mouth with the potato-side touching the tongue first. Precision is everything.

Those who start at the bottom are the flexible kind. They will effortlessly take a couple of bites from the bottom and won’t hesitate to break the sequence and try the top either. And then come back to the bottom to start all over again. This happy-go-lucky bunch of Masala Dosa enthusiasts have no set pattern and will take their bit of chew on the interior and an almost glassy crust, soak up the dipping ingredients and eat in whichever way seems best for them.

The next kind would be those who nibble tenderly at the roasted edges of the dosa, while they look meaningfully into the eyes of their partner or while they wile away time. They take their own sweet time with one tiny nibble through which they accomplish two things – spend the requisite time indulging in a conversation and they create the perception in their own minds of having eaten it.

Those who karate chop it from the center, delve into the middle, and wolf down the potato masala straightaway with the first bite are mostly the teenagers. They have done the dosa in the past, they come with a hungry belly and get down to business right away without much ado. According to them it’s a no-fuss relationship between them and the dosa.

The guys who open the fold have connotations of poetry in their hearts. They are matter-of-fact types. For them the potato stuffing is just something in the middle and they are aware that if you start at the top or bottom and make your way in, there will be very little dosa left to deal with the masala. So, they might as well rip open the damn thing and spread it across. Flip it open, flip it close.

There are two clear reasons why the Masala Dosa makes for such a riveting experience, even if it sounds weirdly voyeuristic. One, the fold. Two, the potato masala—the “lightly cooked filling of potatoes, fried onions, and spices”—which lies beneath the fold whispering ‘eat me….’. So how do you like to serenade this romantic proposition of a meal? Take it slow for a fulfilling experience, or turn into a bull in a china shop?! Tell us!