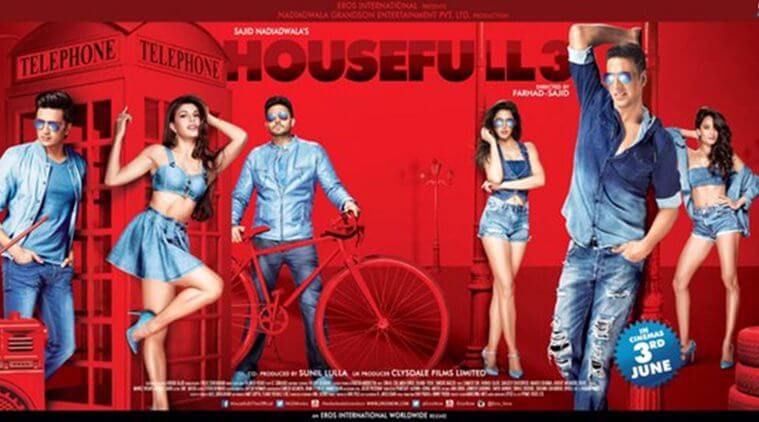 2)In a mindless caper- the first rule is-Where there is a will, there is a way. So, one has to have the willingness to laugh, and not find mistakes – to enjoy.

3) Genuinely funny films are so hard to come across, so when there is one- please don’t shun, but have fun.

This is HOUSEFULL 3- a mindless caper, where logic is on holiday and the writers, directors and actors are in a mood to have fun and let the audience blow their tops too. It works on many levels- it has an interesting screenplay with hazaar jokes , it has a fine set of actors with great comic timing (the best of them being Akshay Kumar), it has a bevy of beauties, who fit the bill beautifully, it has a supporting cast which is funny and competent and the movie is colour-full, cheer-full and laugh-full. That there are going to be HOUSEFULLs is almost a certainty.

HOSEFULL-2 had as many as 4 Sajid’s sharing the honours- Sajid Khan (director), Sajid Nadiadwala (producer), Sajid-Farhad (writers) and Sajid-Wajid (music directors). In part 3, the production remains in same hands, the writers have been upgraded as directors also and the original director of part 1 and 2 has been shown the door, and also the music-director duo has been replaced. The result is not bad at all. Everything is fine, as long as the brain has no say. The movie is pleasing in its visual appeal, the jokes are laughable (though, fun has been made at the expense of differently abled and coloured people, there is nothing very objectionable or below the belt) and the overall fun factor is omnipresent. Akshay is so good that mindlessness becomes a virtue. Riteish Deshmukh and Abhishek Bachchan are more than adequate. Jacqueline Fernandes, Nargis Fakhri, and Lisa Haydon look beautiful and give all that is expected of them. Boman is Boman – always dependable and Jacky Shroff is a welcome addition to the film and plays the good-hearted bad guy to near perfection.

Music is good and fun and provides the right impetus to the film. K. Subash, who wrote the fun-filled CHENNAI EXPRESS and the soul-less DILWALE is credited with the story. Production values are good and the tempo is great. Unless one unnecessarily wants to indulge one’s brain, everything works for this one. Have a ball ! it is what they call A LAUGH-RIOT ! Wishing well-deserved HOUSEFULLS a third time!