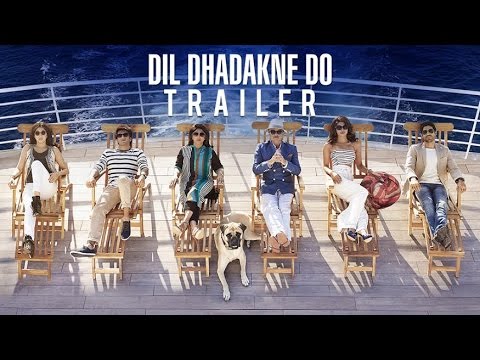 The biggest problem with directors who have given a great film is to surpass it with their next film. Ramesh Sippy, gave great products like Shaan, Shakti and Saagar after Sholay, but could never surpass the “greatest motion picture ever made”. DIL DHADAKNE DO is very good film, but yes, you guessed it right- it lags in comparison to Zoya Akhtar’s last -ZINDAGI NA MILEGI DOBARA, which is now a cult classic on fighting your fears and living life on your own terms. Other than that, you can find few faults with the new film. DDD is a lavish entertainer, where complex relationships are scanned, understood, analyzed and interpreted most entertainingly, interestingly. It is about people who dare to take chances in life and also those who flow with the flow, in fear of change. The characters are superbly etched and dysfunctional relationships have a mirror shown to them, like of which is rarely done in Hindi cinema. The sibling chemistry between Ranveer and Priyanka is also of a new, higher level. Using a cruise to tell the story and the many small stories of its characters on board is an engrossing idea and there lies an unique freshness element of the film. Co-writer Reema Kagti , who started with “Honeymoon Travels Pvt. Ltd.” seems to have made the canvas bigger to tell another tale of relationships and changes in them, while holidaying. Of course, we get more time to think about each other, talk to people, meet and understand new people when at leisure. The hollowness and sense of void in the lives of rich, good-looking and successful people is also brought to light effectively in the film. The film belongs to the director and its main actors- Anil Kapoor, Shefali Shah, Ranveer Singh, Farhan Akhtar and Priyanka Chopra. Had the film been made with the original cast of Ranbir Kapoor, Kareena Kapoor as brother-sister and Hrithik and Katrina – it would have been a great casting coup. And yet, we cannot deduct anything from the new casting and the performances of the actors who finally got to play these characters. Priyanka, who seems to be much more beautiful than when she was Miss World, has matured as an actor to great extents -her confidence, her subtle expressions, her dressing, her carrying herself all add to the character of the independent yet balanced, successful yet parched Ayesha becoming special. Ranveer plays the 25 year old Kabir, yet to get out of his great father’s shadow effortlessly, intelligently and most endearingly. Anil Kapoor gives yet another very good performance and Shefali Shah, in probably her biggest movie, is perfect. Yet, many come out of the theatres in love with Farhan Akhtar, who is there in a special appearance. Anushka, many feel, lacks something in looks and attractiveness department, almost always makes it up with her performances. The casting of Rahul Bose as Pee Cee’s husband is a brave and very interesting attempt and it gives a different dimension to the relationship. Yet, Rahul, inspite of the fine actor that he is, does not fully capitalize the opportunity. He is just good. The ensemble cast is good, and Zoya’s handling of so, so many characters in this tale is astounding. The music by Shanker Ehsaan Loy is good, true to the spirit of the movie. Cinematographer Carlos Catalan had made Spain look much more beautiful in ZNMD than what he is able to do to Turkey and the Mediterranean Sea in this movie. On that count, the over-expecting spectator may have a slight disappointment with Zoya- but only slight.

‘Log kya kahenge-chhodo aise sab bahane’ in the title song explains the underlying philosophy in the film. It’s best not to care and do what makes your heart beat. Bas, DIL DHADAKNE DO-that is what counts. Let your heart rule and make you enjoy life. Another interesting dialogue goes “Agar Shahjahan practical ho jaata,to TajMahal kaise banta”. You cannot be practical in matters of heart.

All in all- the writers do a great job, actors deliver, Zoya adds another feather to her cap, audience enjoys- the script for a superhit and a complete entertainer. But like what “PK” last year, did after “3 Idiots”, this film might earn more than “ZNMD”, yet will have critics pointing out all the time that it is not as great as the director’s last one. But it is a must watch and a great summer vacation gift. Bon Voyage!!