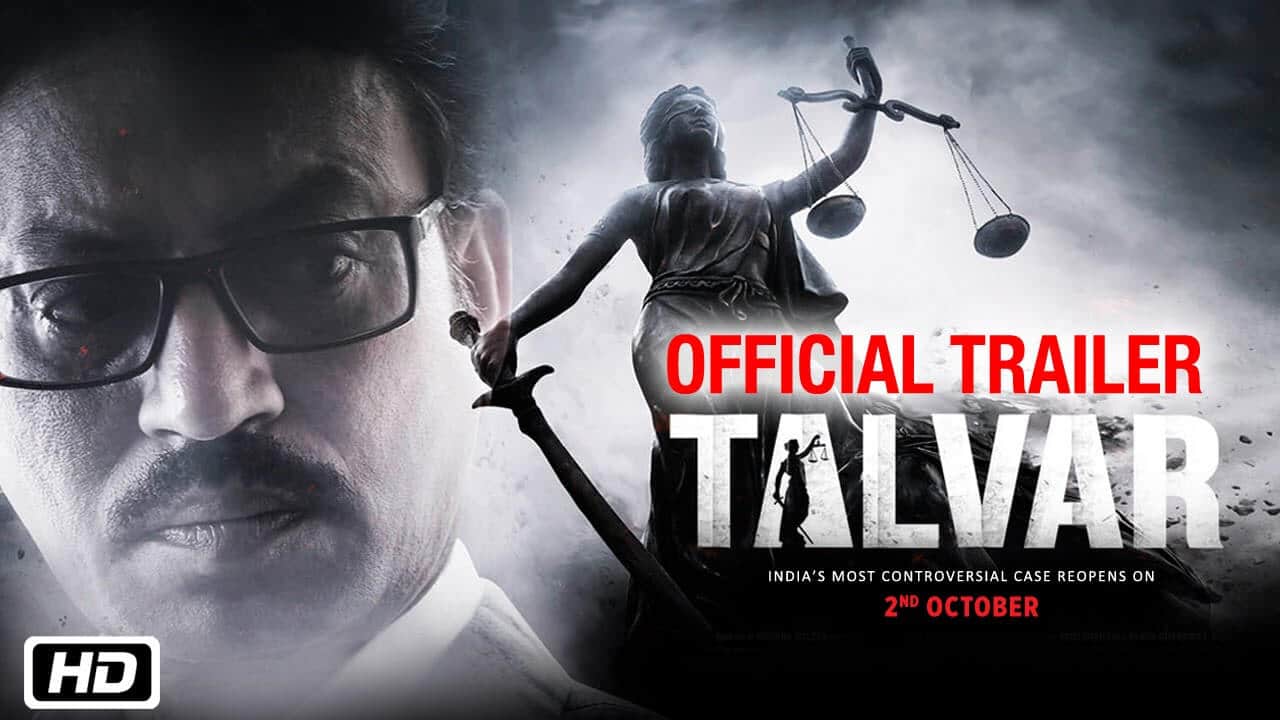 TALVAR is a very intelligent film, that jolts you out of your comfortable seats, because of its approach. ‘Ek begunaah ko sazaa nahin milni chahiye, bhale hi dus gunehgaar azaad ho jaaye’, is what the film’s investigating officer says, but it is disturbing to note that the legal system cannot probably ensure that all the time. Vishal Bhardwaj comes up with a most brilliant screenplay of this comprehensive case study of the real-life Aarushi Talwar murder case, where both the parents have been implicated. Meghna Gulzar keeps the film as real as possible, and not even the remotest actors seem to be ‘acting’-everything seems to be almost real. Meghna excels and almost immediately rids herself of the stigma of having directed very ordinary films like PHILHAAL(2002) and JUST MARRIED(2007).

Our friend, Irrfan Khan gives another absolutely controlled and effortless performance and adds any number of hues to his character and is in short-brilliant. Neeraj Kabi as the victim’s father is very restrained and commendable. Konkana Sen as the mother does her bit very well. It is the ensemble cast that is most astonishing. Every single character lives his role and there is never a feeling that something unreal is happening. Sohum Shah as ACP Vedant, Prakash Belawadi as Swamy (Irrfan’s former CDI boss) and Gajraj Rao as Inspector Dhaniram stand out as triumphs of actors and characters, both. However, Tabu’s is a character that is under-developed, rather under-emphasized because she is an outsider to the crime scene. For any other actress, it would do but for Tabu-she might have to think of avoiding such roles, because everyone expects something special from her.

TALVAR is a very interesting title for the film, because though the movie is based on the story of Talwar family, the title interestingly isn’t the surname spelt different. It points to the sword held in one of the hands of the blind-folded Lady Justice, whose other hand holds the scale of justice. Though there are no doubts that the story tells the tale of the double murders that occurred in Ramesh-Nupur Talwar household,yet all names are changed, even the CBI appears as CDI in the movie.
All in all, here is a film that can be watched and appreciated by even those, who are most critical of Hindi films, because its content and treatment are different, realistic and intelligent. The movie is a ‘must see’, notwithstanding that it is disturbing to watch the dead body of a 14 year old being shown over and over again. But again, that is what the film is all about. So, perhaps, it was unavoidable. Highly recommended because of its screenplay, direction, acting and overall treatment. The film, in spite of being objective and impartial, boldly throws many things in favour of the girl’s parents, who appear to have been victimized and wrongly convicted !