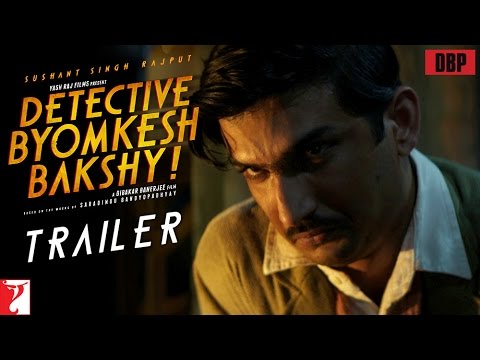 With “Detective Byomkesh Bakshy”, Dibakar Banerjee and Yashraj Films offer another genre-which has been left untouched since a long time in Hindi films-“suspense”. It is a particularly well-made film, where director , cinematographer and production designers almost overscore. The leading actor, Sushant Singh Rajput, who has been more than lucky in the roles he has been getting-is however adequate and seems content being the director’s actor. Actually, the highpoint is the creation of Calcutta of the early 40s, with immaculate detailing and the brilliant camerawork of Nikos Andritsakis , which has the flavour and texture of all that was classy about black and white films of the yore.

It is hard to perceive that “Detective Byomkesh Bakshy” has been directed by the same Dibakar Banerjee, who made the hilarious “Khosla Ka Ghosla”. And it has to be taken as a compliment for the film-maker, who didn’t let the success and acclaim of his first two films dictate the type of films he would be making later. “Detective Byomkesh Bakshy” is closer to his last film “Shanghai” in terms of sensibilities than “Khosla Ka Ghosla”, “Oye Lucky Lucky Oye” and “Love,Sex and Dhoka”, yet as different as different could be. The man is on a sure-shot journey to be identified as a versatile director.

The plot is intriguing, but it is more of a detective’s adventure rather than his crime-solving ability that comes to the fore. There are lots of characters, all well-etched and portrayed very effectively that add fullness to the tale. Anand Tiwari as Ajit, the dead-man’s son, Swastika Mukherjee as Anguri Devi, Divya Menon as Satyawati and most of all Neeraj Kabi as Dr. Anukul Guha are very good to excellent. Historically, most people sitting in the cinemas will be at a loss about what actually transpired in Calcutta in 1942-43, but the director and the script educates about the period in a very intelligent way. Yet, the pace of the tale is not the fastest and though the suspense element remains, it never compels the audience to think-‘what next’. The trams, the old buildings, crowded roads, the posters on trams and walls, the dark lanes and by-lanes, the dingy rooms , the attire of the cast and the extras get full marks because the director’s conception of the era is extra-ordinary .Yet, as a tale, the film could have been more gripping. It rarely takes one to the edge of the seat.

All in all, here is a very good movie, a must -see, but it appears that Sharadindu Bandyopadhyay’s fictional sleuth might actually find more love from the critics and intelligentsia, than the masses. But we wish it all the best to become a hit- because the film-makers have left no stone unturned to make it with love, care and understanding.

Catch the movie in your city. Find show timings for Detective Byomkesh Bakshy in your city – click here