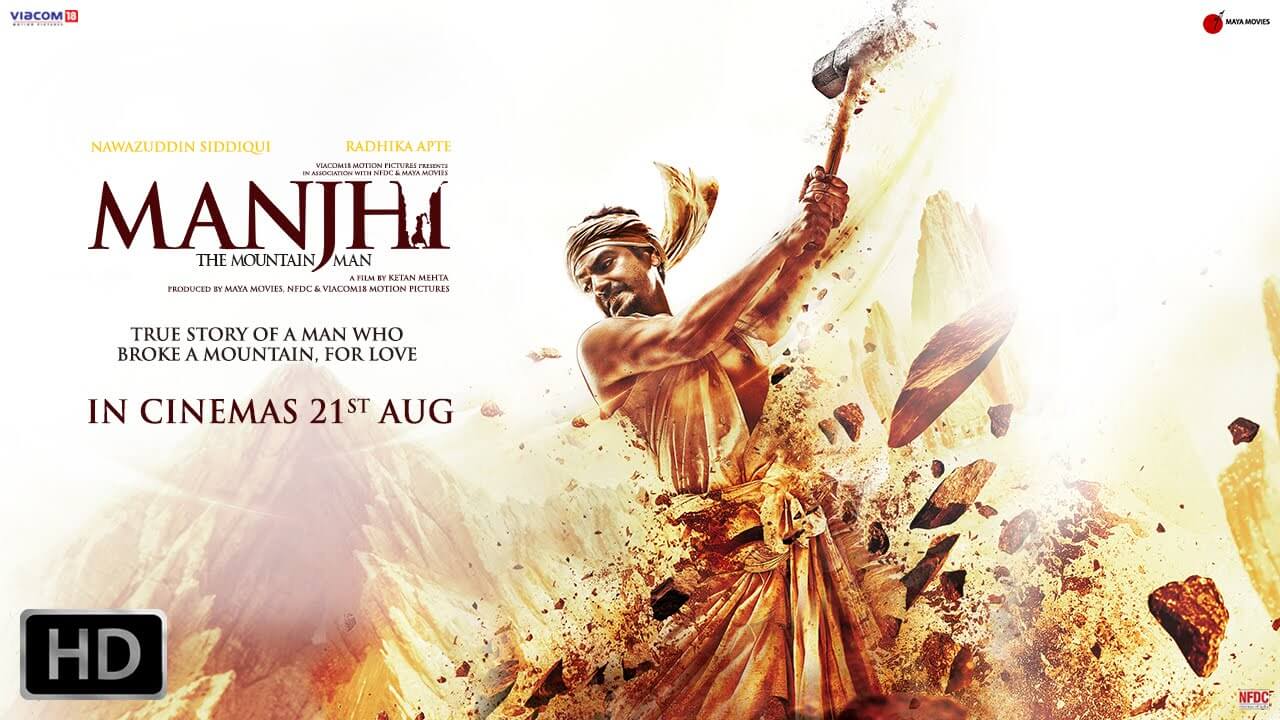 MANJHI- is a brave tale of a brave man. Brave man –for he single-handedly makes a road in a mountain with a hammer and chisel alone. And brave tale- because it is not a story many would dare to translate on celluloid. Congrats to Ketan Mehta for picking a biographical subject so different. But one needs to deduct some marks from him for dramatizing the tale a bit more than optimum levels that such a realistic film perhaps demands. Ketan Mehta, since his directorial debut Bhavni Bhavai(1980)has been receiving accolades and occasional brickbats and here he finally strikes a balance, where his style of film-making might find favour in a small way at the box-office. He had, however, failed to do the same when he got his biggest chance till date in the form of Aamir Khan’s “Mangal Pandey-The Uprising”. The director, who has to his credit 2 flops each with Aamir Khan (Holi -1984 and Mangal Pandey-2005) and Shahrukh Khan (Maya Memsaab-1992 and O Darling! Yeh Hai India-1995), finally connects to the mainstream audience via Nawazuddin Siddiqui. Nawazuddin gives another brilliant performance and this time he carries the entire film on his shoulders. Radhika Apte, who quietly but surely is turning out to be the Find of The Year (Badlapur, Hunterr, the Ahilya ad and now Manjhi) is a charming actress, and this doe-eyed, dusky babe is attracting both with her sultry looks and sizzling performances. Here too, notwithstanding her neatly threaded eye-brows and her unusually clean complexion for a village girl and her blouse-less sarees, she performs as a perfect partner to the mountain man. Ketan’s style of taking the story forward and backwards maybe a great cinematic tool, but it is the same aspect that tends to make it confusing for the simple-minded mainstream cinegoer. The village zamindar played by Tigmanshu Dulia is adequate. The love story element in Dashrath Manjhi’s tale is interesting,though exaggerated at times. The dream sequences and the metaphor of TajMahal don’t add much to the need of a film like this. There seems a conscious effort from the film-maker to make the movie interesting to watch, and that somehow becomes the weak point of the film, as it robs it of the realistic touch.

All said and done, MANJHI is a neat, watchable film , that will appeal to the discerning viewer, who looks for variety on his plate and might even strike sort of a cord with the regular cinegoer. Must be watched for its touching a really off-beat subject and not disappointing.